We've induced nearly 1°C of global warming above the pre-industrial average. The effects of that 1°C of warming are what science was predicting ten years ago for 2°C of warming---food crop failures, huge losses of arctic ice, nearly 400,000 deaths a year from global warming, much more extreme weather like hurricane Sandy.

The 32 gigatons of carbon we dump into the atmosphere every year have already baked in nearly another degree of warming, no matter what we do from here on in. And we're still increasing that dump by about a gigaton a year.

And that's just the beginning. Fossil fuel companies have 2,795 gigatons of carbon or more in the ground. They're doing their best to get it extracted, sold and burned. That much carbon will raise average global temperature about 6°C and cause irreparable damage to the planet (graphic here).

To avoid this, starting right now we'd have to reduce carbon emissions 3–4% per year worldwide by taxing carbon and leaving nearly all those oil and gas deposits in the ground.

We're doing nothing like that. There's no sign we can agree worldwide on anything like it. Not least because a 3-4% yearly reduction in carbon emissions is incompatible with continuing worldwide economic growth (details here). With negative economic growth, our economies crash.

Organised money (aka the 1%) and its useful idiots (aka the political & economic right) understand this. They're sure that effective global warming reversal will turn their country into USSR 2.0. So they're fighting it with everything they have.

Danielle Droitsch, NASA's James Hansen: tar sands is the "dirtiest of fuels" and "game over for the climate, http://switchboard.nrdc.org/blogs/ddroitsch/nasas_james_hansen_says_tar_sa.html

Naomi Klein, Capitalism vs the climate, http://www.thenation.com/print/article/164497/capitalism-vs-climate
Posted by Peter Brawley at 20:11 No comments:

Thought police in the land of the unfree


Imran Khan, a former Pakistan cricket captain who became a politician, has been campaigning against US drone strikes that have killed many Pakistani civilians. On his way from Canada to New York to attend a fundraiser, he was taken off his flight by US immigration officials to be questioned over his views on drone strikes.

A US state department spokeswoman said "We are aware that Imran Khan was briefly delayed in Toronto before boarding the next flight to the United States."

If you intend to visit the US, and if you're politically active, get ready to be questioned about your political views.

Posted by Peter Brawley at 10:09 No comments:

Evolution and Big Bang theory "straight from the pit of hell"

ATHENS, Ga. — Georgia Rep. Paul Broun said in videotaped remarks that evolution, embryology and the Big Bang theory are "lies straight from the pit of hell" meant to convince people that they do not need a savior.

The Republican lawmaker made those comments during a speech Sept. 27 at a sportsman’s banquet at Liberty Baptist Church in Hartwell. Broun, a medical doctor, is running for re-election in November unopposed by Democrats.

"God’s word is true," Broun said, according to a video posted on the church’s website. "I’ve come to understand that. All that stuff I was taught about evolution and embryology and Big Bang theory, all that is lies straight from the pit of hell. And it’s lies to try to keep me and all the folks who are taught that from understanding that they need a savior."

Broun also said that he believes the Earth is about 9,000 years old and that it was made in six days. Those beliefs are held by fundamentalist Christians who believe the creation accounts in the Bible to be literally true.

Broun spokeswoman Meredith Griffanti told the Athens Banner-Herald that Broun was recorded speaking off-the-record to a church group about his religious beliefs. He sits on the House Committee on Science, Space and Technology.(my emphasis).

Where does the Republican party find such people? And how does such a man manage to be appointed to a science committee?  It boggles the mind.
Posted by ArtfulOne at 07:31 No comments:


Speaking to a rightwing US thinktank, US Supreme Court Associate Justice Antonin Scalia couldn't have been clearer. The death penalty? The framers of the Constitution didn't think it unconstituional, so it can't be. Preventing abortion? "Absolutely easy. Nobody ever thought the Constitution prevented restrictions on abortion." Homosexual sodomy? "Come on. For 200 years, it was criminal in every state."

In minds like that, which came first, love of the absolute, or love of the ideas that are held so absolutely?

Why's it called the American dream?

'Cuz to believe it you have to be asleep.

Not a new joke, but it sums up what Columbia University economist and Nobel laureate Joe Stiglitz said in an interview with Der Spiegel.

"The life chances of a young US citizen are more dependent on the income and education of his parents than in any other advanced industrial country for which there is data ...

"There has been no improvement in well-being for the typical American family for 20 years. On the other side, the top one percent of the population gets 40 percent more in one week than the bottom fifth receive in a full year ...

"... the top 1% in the United States has an average tax rate of less than 30 percent of their reported income, and the large proportion who take much of their income as capital gains pay far less. And we know that they are not reporting all of their income ...

"There is nothing wrong if someone who has invented the transistor or made some other technical breakthrough that is beneficial for all receives a large income. He deserves the money. But many of those in the financial sector got rich by economic manipulation, by deceptive and anti-competitive practices, by predatory lending. They took advantage of the poor and uninformed, as they made enormous amounts of money by preying upon these groups with predatory lending. They sold them costly mortgages and were hiding details of the fees in fine print."

(If you'd rather read personal stories than statistics, try the story of how wheelchair-bound Ana Wilson is trying to keep Wells Fargo from evicting her from the house she's lived in for 37 years.)

Der Spiegel: Why didn't the government stop this behaviour?

"... The financial elite support the political campaigns with huge contributions. They buy the rules that allow them to make the money. Much of the inequality that exists today is a result of government policies."

Der Spiegel: 99% against 1 percent: That actually sounds like the perfect setting for a revolution. Why are things still so calm in the US?

"The United States doesn't have much of a revolutionary spirit. My real concern is that people get alienated from politics. In the last election we had a voter turnout among young people of around 20 percent. These are the people whose future is most at stake, and 80 percent of them think it's not worth to vote because it is a rigged system and in the end the banks are going to run the country anyway."

"... More than a quarter of all homeowners owe more money than the value of their houses ... We haven't invested enough for 30 years -- in infrastructure, technology, education... The United States can borrow at close to a zero percent interest rate, we would be stupid not to invest more money and create jobs. And we could also make efforts to ensure that the super-wealthy pay their fair share  ..."

His aim looks pretty good on Europe too ...

"... Europe's crisis is not caused by excessive long-term debts and deficits. It is caused by cutbacks in government expenditures. The recession caused the deficits, not the other way around. Before the crisis Spain and Ireland ran budget surpluses. They cannot be accused of fiscal profligacy. More fiscal discipline will only worsen the downturn. No economy ever recovered from a downturn through austerity."

Der Spiegel: Really? What about Estonia or Latvia? With severe pay cuts the Baltic states boosted productivity and recovered.

"They are small economies. They can make up for the loss of government spending by more exports. But that doesn't work with a fixed exchange rate and when your trading partners are not doing well. The crisis countries don't suffer from excessive spending. The problem is not supply but demand. It is the responsibility of monetary and fiscal policy to maintain the economy at full employment."

Der Spiegel: No matter what the costs? No private household can live beyond its means permanently. Why should governments be exempted from that rule?

"Because countries are different from households. If a citizen cuts back his spending, it is without any consequences for the country. Unemployment does not increase. But if the government cuts back its spending, it has a major effect. An expansion of spending can increase production by creating jobs that will be filled by people who would otherwise be unemployed."

Posted by Peter Brawley at 06:19 No comments:

Martha, open source, and us

Martha Payne is nine years old. She lives in Scotland. A couple of months ago she started a blog about the disgusting food her school was serving up at lunchtime. Pretty soon her blog was attracting thousands of readers. Two weeks ago the school council shut her down.

What made the school council think they could get away with that? Most of human history, is all.

For a delightful riff that begins with that story and goes on to Gutenberg, Linus Torvalds, github, freedom, and you and me, have a peek at Clay Shirky's TED talk.

What François Hollande knows, that we forgot

To hear the anglosphere rightwing talk, you'd think government debt is about to send us into the economic dustbin with Greece. What are the facts?

Here's a plot, from Chapter 5 of the 2010 Economic Report of the President, of US public debt from 1920 through now, then projected for the next thirty years: 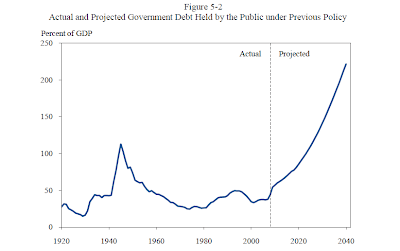 Current debt is near the average it's been for 90 years.

Through that period, there've been two dramatic jumps in debt level, first from the Great Depression, then from World War II. 1980-1992 saw a third,  smaller debt rise created by the policies of Reagan and Bush the Elder.

Right now there's not a big federal debt problem in the US. That's reflected in current near-zero interest rates.

The problem is entirely with what's projected to happen in the next 30 years. Unless that trend's undone, at some point investors would stop buying US federal paper.

What are the big causes of that projected rise? Bush the Younger's tax cuts for the rich, Bush the Younger's refusal to pay for his wars and his Medicare prescription drug program, and huge inefficiencies in US health care (it costs almost twice as much per capita as Canada's system, and gets worse results).

Retirement age is a complicated issue. So is Obamacare. Raising taxes, maybe not so much.

The rightwing says increasing taxes on the rich will slow down job growth. Is there evidence for that?

The US Congressional Research Service has just studied the question. It found that "reduction in the top tax rates have had little association with saving, investment, or productivity growth."

During 20th century periods of greatest economic growth in the US, tax rates for the rich were near that, or higher.

Posted by Peter Brawley at 09:38 No comments: